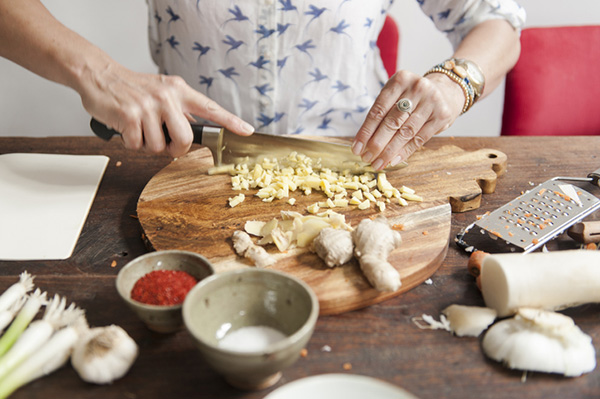 Here’s a story about some medical research that starts not in a petri dish or primate lab but a farmer’s market.

That’s where researchers in Georgia found a supply of ginger – the knobby root used in many cultures to flavor kimchi, sushi, soup, salad, noodles and chai, and also as a natural medicine taken for nausea, arthritic pain and other ailments.

They had an idea that ginger delivered in microscopic particles could be useful in treating inflammatory bowel disorders, such as Crohn’s disease and ulcerative colitis.

As it turned out, they were right.

According to findings published in the journal Biomaterials, scientists from the Georgia State Institute for Biomedical Sciences and the Atlanta Veterans Affairs Medical Center in Decatur, Ga., found that ginger sliced to a small fraction of the width of a human hair efficiently targeted the colons of mice. Further, the treatment didn’t harm the rodents.

Ginger as a nanoparticle

The Georgia researchers started the way you might, if you brought ginger home from the market. They chopped it in a blender.

But then they put it in a centrifuge that broke it down to a size so small that 300 of the ginger particles could fit in the width of a hair. And then they fed them to mice.

Benefits of a natural drug

The researchers noted that ginger has the added benefits of being nontoxic and abundant. Its production as a medicine wouldn’t be limited, as is the case with many synthetic drugs, they said.

Ginger has long been touted as a natural treatment for a variety of ailments. Advocates say it helps:

Government health agencies are more cautious about the benefits of alternative supplements such as ginger. They caution that users should make certain that supplements don’t interfere with any prescription medications they take.

The study, “Edible ginger-derived nanoparticles: A novel therapeutic approach for the prevention and treatment of inflammatory bowel disease and colitis-associated cancer,” was published in Biomaterials.

Talk to your health care provider about whether and how to take ginger as a health supplement. Use our provider directory to find the right Providence physician for you. Through Providence Express Care Virtual, you can also access a full range of healthcare services.